We now know that his proper lineage is:

We know from census and voting records that Joseph and Hannah also had a son named Joseph.  In Alva’s book he is incorrectly listed as a son of Joseph generation II and Mary Loan.  Alva also listed three sons of this Joseph; John, Richard who married Elizabeth Stinson, and Jacob.

The easiest line to trace from these sons was that of Richard whose wife was known.  One of his daughters was Isabelle (Belle) Gorby Collins who lived in Chester, Delaware Co, PA.  Once again, we refer back to her letter:

In a letter written in 1909 to Leon A Gorby of E Palestine, OH, she [Belle] mentions Uncle Jonathon, Uncle Samuel and Uncle Jacob.   “Uncle Jacob” as being the only one of her father’s brothers whom she had ever seen.

A lot of work by cousin Bruce Gorby, a descendant of Richard‘s brother Jacob, has established his line as being:

Alva had originally listed this line as possible descendants of Richard Gorby and Margaret Carter:

The following group of Gorbys may belong to this line of Gorbys. Parkside, Chester, PA.

A letter to Leon A Gorby from Willard A Gorby, dated December 30, 1930, gave the above information, stating that this was all they knew of their ancestry except that his grandfather Benjamin had an uncle Joseph Gorby who was drowned – still single.

Benjamin’s father could have been a son of Robert Cloud Gorby of Chester, PA, whose brother, Joseph C Gorby, was drowned in the Delaware River.  He was single.  This may be the solution here.

So this gives us two of the three sons listed by Alva, and this also matches what Isabelle Gorby Collins wrote in 1909.

Several years ago we were approached by Kathryn Perkins who was trying to tie her ancestors to their proper place on the Gorby Family Tree.

For many years we suspected that this Samuel Gorby was a brother of Richard and Jacob, one of the uncles listed in Isabelle‘s letter.  But we never had any documentation that tied Samuel to either known brother, or to their father Joseph.  Until now.

Located in the Delaware Genealogical Society Journal Volume 7, Number 2 published October 1993 we found the following names on an 1826 roster of students attending the Brandywine Manufacturer’s Sunday School which was located near Wilmington in New castle Co, DE. 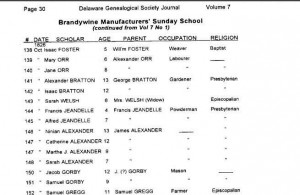 And now we have a document that allows us to officially attach the descendants of Samuel Gorby and Emaline Shay to their proper branch in the Gorby Family Tree.